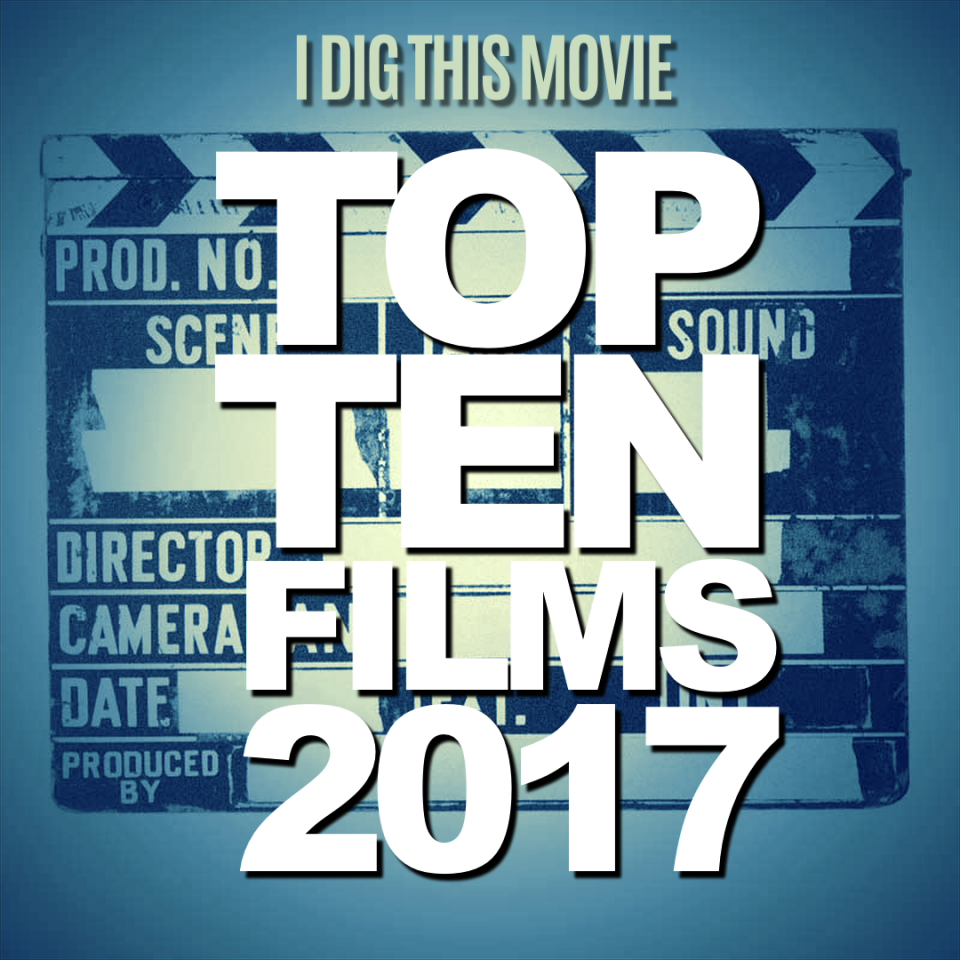 We did a full podcast episode of I DIG THIS MOVIE on Austin and I's Top 10 films of 2017. To listen, either head over to the podcast section of this website, or go to idigthismovie.com

So here's my top 10 of 2017. This is litterally just films I saw between Jan 1st - Dec 31st 2017. I possibly could've included Silence but it felt weird to include a film I saw on the 2nd of January so it got left off. A couple of other films that were big in 2016 but didn't come out in the UK until 2017 were in the running but it was such a competative year, it felt far too easy to leave them off. In another year it might have been different.

FYI here's 5 appallingly awful films that deserve everyone's disdain. Well to be fair, these were pretty much the only 5 films I actually hated this year (I had about 20 last year) and I didn't walk out of anything in 2017 (I walked out of 3 in 2016). So maybe overall things are getting better.

VALERIAN: CITY OF A THOUSAND PLANETS - I feel bad because Besson clearly cares, it's just so bad, it's some of the worst miscasting I've ever seen, the plot is gibberish and I came so close to just walking out of it.

FREE FIRE - A case study in some of the worst direction I've seen this year. The lack of spacial geography and visual coherence makes large chunks of this movie unbearable to watch.

SPLIT - A movie bogged down in so much dumb pop-psychology and psedo-science it's laughable anyone ever thought it was offensive. Not to mention it turns out it's just a teaser for a sequel people really don't want as much as they think they do.

JUSTICE LEAGUE - This is everything wrong with modern studio filmmaking, the fact there are people willing to give it a pass is ridiculous. It's not a movie, it's a contractual obligation with no purpose other then to meet a release date. It's insulting they are asking people to pay money to watch it.

THE MUMMY - See everything I said about Justice League. The only thing that makes this worse is the studio trying to force a franchise the public had no interest in purely because these were characters they wouldn't have to pay any rights on. At least people want a DC Universe, nobody gives a f*ck about a Cinematic Universe with characters that were popular before the studio's target demographic's grandparents were born.

OVERRATED (Not Bad, But Seriously Way Over Praised)

WONDER WOMAN - Seriously all this proves is that women can be the stars and direct mediocre Super Hero films, just like men. I'm still baffled by the amout of praise this generic piece of studio product has gotten, especially when it's tone was all over the place, it's love story was bland (despite two charismatic actors) and it's ending was atrocious CGI nonsense and doesn't make any damn sense (think about it, if she kills Aries in order to stop World War 1 because he's responsible for it, how does World War 2 happen?)

THE LEGO BATMAN MOVIE - Really we shouldn't be rewarding studios for just putting out IP in Lego form. He was funny in the Lego movie but this was a step too far.

IT COMES AT NIGHT - I still don't know what the f*ck comes at night.

STAR WARS: THE LAST JEDI - Best Star Wars film ever made as far as I'm concerned.

DETROIT - Hey when the Right is saying it's an SJW fantasy and the Left is saying it's problematic, maybe you're doing something right. All I know is I still think Kathryn Bigelow is one of the most interesting directors in Hollywood.

AMERICAN MADE - One of the most pleasant surprises I had all year.

LOGAN LUCKY - Just some of the most easy going fun I had all year.

THE BIG SICK - I miss the 90s Romantic Comedy, clearly Kumail Nanjiani does too

Simple, stripped back and brutal. This film was an incredible visceral experience.

A lean indie that perfectly encapsulates everything that should be championed about British Cinema. A flawlessly executed 90 minutes.

This is a movie that has all the hallmarks of cliche but all the smarts to navigate them in a sensative and honest fashion. It boasts powerhouse performances from Winstone, McShane and Smiley but its true greatness really comes down to the brilliant writing and performance of its star Johnny Harris.

A subtile and moody film which flows beautifully and is acted to absolute perfection. I can't wait to see what Dee Rees does next.

As everything Edgar Wright does, it's a great piece of visual storytelling. It's a tribute to Americana and 70's cinema and it's so, so f*cking fun.

A beautiful tribute to an incredible story that had me in tears by the end.

Taylor Sheridan tells classic stories in a modern setting. Both Sicario and Hell or High Water were on my top 10 lists the last two years. This is a film concerned with process and mourning rather then thrills and entertainment. It's a modern Western dealing with the realities of reservations today. The only thing that keeps it lower is Sheridan's direction hasn't quite reached the heights of his writing.

A lean race against the clock through the seedy underbelly of New York. Pattinson is absolutely fantastic and easily carries the whole film but the gritty autheticity and blunt reality is what keeps this film focused and viewer constantly guessing.

This film continues the wonderful tradition of the original and Paddington 2 easily slots back into the wonderful effortless whimsy of the first. But the real ace in the hole for these films is clearly Paul King. I'd love to see what else he can do but I'd fear for the future of Paddington without him. Seriously this film has the best physical comedy you will see executed in any film all year.

It was inevitable. From the themes of the Western Hero, to the namechecking of Shane and finally when I thought I'd made it to the end in one piece, the closing credits start playing Johnny Cash and I'm left a nervous wreck of emotions. This film was made to push all the right buttons with me and there was no chance I was going to get out of without turning into an emotional wreck. However the thing I couldn't care less about is X-Men angle, Logan transcends being a comicbook character and instead uses the lore to plant Logan into the grand operatic world of the American Myth. It's a beautiful end to the character and Hugh Jackman honestly deserves a f*cking Oscar nomination for it. I weep for the dying future of R-rated movies for grown ups and Logan is the reason why.